So Into Aurelio Zen

My mother and I both love a good mystery novel. We also both love a foxy man so this post is really dedicated to her.

A while back the Mamma recommended the Aurelio Zen novels, about a Venetian detective, by Michael Dibdin. I read them; they were pretty good. It’s been a while since I read the books but when I heard that the BBC had done a Zen series I was pretty excited, especially since it stars Rufus Sewell, who is a major babe of the t d and handsome type. The series takes place in Rome, and is cast primarily with British actors, and Italian actresses. Its actually a pretty interesting contrast, with all the accents going on and all the background chatter happening in Italian. (I also thought it was set in the sixties because of the jazzy theme music and also Zen’s slim cut suit, but my boyfriend watched for thirty seconds and informed me that I was wrong.  Oops.)

Zen started airing on PBS this weekend, but I managed to get a hold of the episodes and have watched two out of the three – they are more like small movies than TV episodes, running about an hour and a half each.  As the title of this post might suggest, I am so into them. 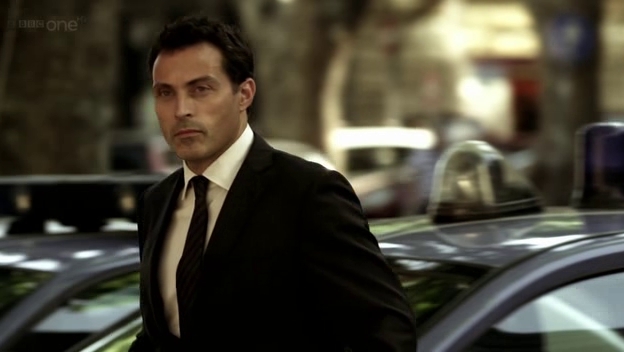 Zen is airing on Sunday nights on PBS from July 17-31.  You can pick up the books from Amazon if you are more the “I prefer to read my books than watch them” type.