A corn field grows in Brooklyn?

I get on and off the F/G trains at Smith and Bergen Streets daily, but it took me weeks to notice the small field of corn growing right there on the south-west corner last summer. It wasn’t until the corn was towering several feet high above a large  concrete garden that I stopped and wondered what it was doing there. What I had encountered wasn’t a freak of nature, but an art piece by Christina Kelly – a visual artist and filmmaker living in Brooklyn – entitled Maize Field. Maize Field at Smith and Bergen Streets in Boerum Hill

Kelly’s inspiration for Maize Field and related projects throughout Brooklyn is the Native American agricultural history that impacted this neighborhood. In the 1600s, the area now called Boerum Hill was maize land cultivated by the Marechkawick Indians. Naturally, Brooklyn has undergone monumental changes in the centuries since. Kelly’s piece explores the contrast between what was and what is for much of our beloved city. According to the artist, “The project participates in the continual change that defines the city by highlighting a historical past then integrating that history back into the present landscape.” For Kelly, Maize Field represents displacement and change, but also restoration and resiliency. 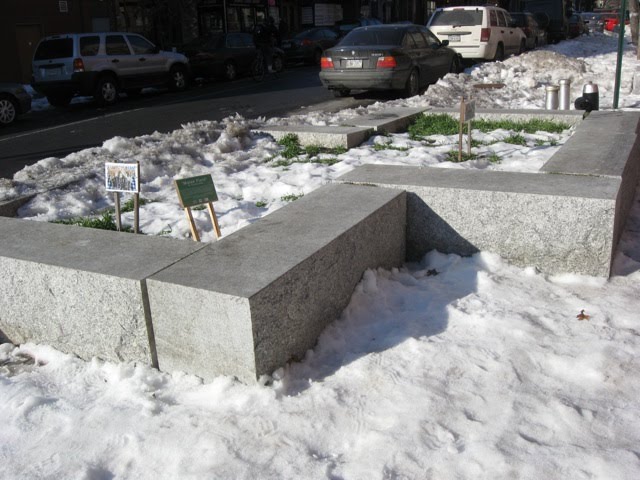 Currently, Maize Field is covered in snow and ice like the rest of the city. Meanwhile Kelly has been busy saving the Lenape Blue Flour corn seeds for next year and plans to plant some in Williamsburg this spring. Keep an eye out for a corn field near you…

Visit the Boerum Hill Maize Field here or follow it’s growth at a blog dedicated to the project.